Whenever you mention a role playing game to someone, there is a big chance that the person that you are talking to is going to think of Dungeons and Dragons straight away. And this is with good reason. Dungeons and Dragons (short D&D) is by far the most known and popular role playing game in the entire world. Even if you don’t play RPG games you probably heard of D&D.

D&D appears everywhere. The most popular computer games in the world are based on this game. Just remember games like Baldur’s gate, Planescape Torment, Neverwinter Nights, or even older ones like Menzoberanzan and Ravenloft! Maybe you saw the Dungeons and Dragons movies. Add to all this the piles of novels and books that are written for the different D&D worlds. So yeah, you probably heard of Dungeons and Dragons. 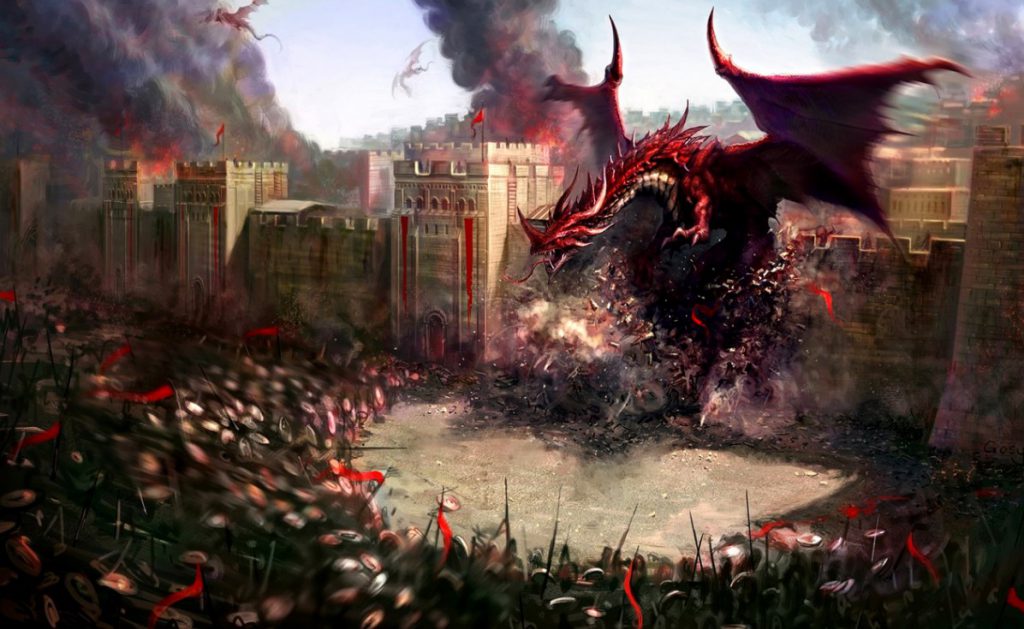 But before all the games, novels, movies and cartons there was the Dungeons and Dragons role playing game! The first version of the game was created way back in 1974! It was designed by two people, who are very well known and famous in the gaming community, Gary Gygax and Dave Arneson. Little did they know that their creation will not only be a game, it will become a way of life for many people and it will start a new type of game called role playing games!

At the beginning, D&D was not a game like we know it today. Its rules evolved a lot during the years. At first it used a variation of the rules from a miniature type game called Chainmail (this game was also created by Gary Gygax). But from there D&D took on a life of its own becoming more and more popular during the late 70s and 80s.
During the years there have been four editions of the Dungeons and Dragons game, changing the game system four times. The first two editions were published by Tactical Studies Rules (TSR) company but later on, the game was bought out and continued by the Wizards of the Coast (WOTC) company who brought us the third and eventually the fourth edition of the game.

Originally D&D was designed to let players play fantasy heroes that go down into a dark and scary place filled with monsters (these places are known as dungeons) with the intent of making it less dark and scary by cleaning out its denizens. Players would select a class that they would like to play like powerful wizards, sneaky rogues, fighters and even elves and dwarves (in the first edition of the game elves, dwarves and halflings were actually considered to be separate classes, there were no races). After creating your character you were ready to go down to the dungeon and start kicking some monster ass.

But heroes don’t just go down to dungeons for no reason. You see, dungeons are filled with ancient and valuable treasure that is just waiting around for someone to come and take it away from those nasty monsters. You could use this treasure to buy new equipment for your hero, so the next time he goes down to the dungeon he could be even more prepared to slay the monsters. But treasure is not all that you can find in the dungeon! There are great and powerful magic items like flaming swords, shields that reflect arrows back to the shooter, helmets that scare off the enemies around you. You could also find magic potions, scrolls with powerful spells written on them and magical jewelry that protects its wearer.

Every time that the heroes went to the dungeon and came back alive, they also received experience points. By accumulating enough experience points, heroes would go up a level, making them stronger and tougher for the challenges that lay ahead. Each level would bring new abilities for the heroes to use against the creatures of the dungeons.

As years went by, Dungeons and Dragons emerged from the dungeons and became an open fantasy world in which the players and the Dungeon Master could create limitless stories. Players could now create their castles, rule over a nation, spend their gold in taverns and gambling, ride to battles alongside big armies, and whatever other things you can imagine. The dungeons became just a tiny piece of this great world.

New classes were added to the existing and races became a part of the character creation process. Players could now create elf palladins, gnome rangers, dwarf barbarians and so on. Slowly it truly evolved into a role playing game like the ones that we know today.

Of course, it wouldn’t be fair if I failed to mention the dice that D&D uses for play. Special polyhedral dice were created for this game. It uses a four, six, eight, ten, twelve and twenty sided die for the various tasks and conflicts in the game. After this, almost every role playing game created used at least one of these special dice for its game mechanics and resolutions.

Dungeons and Dragons lets you create your own fantasy world in which you and your fellow players will create and play out tales of great heroism, incredible skirmishes and battles, and epic quests that will lead your heroes on a path to becoming a legend in the world. But not everyone can create their own worlds and that’s ok. This is why there are a couple of setting books out there that present different worlds to you. The most famous settings for D&D are the Forgotten Realms, Ebberon, Dark Sun, Ravenloft and so on. Even in these already predefined worlds, the stories and adventures that you can create are limitless. These books are there only to be your guide to a great fantasy world and you can easily change everything that you want.

Dungeons and Dragons! There is no better game to think of when talking about role playing games. It is truly a game that can make any fantasy story come to life, whiter you make up one on your own or just want to play out an adventure from a movie, book or a cartoon.