If you prefer the dark side, breaking mining tools, extinguishing light in the tunnels and stabbing hard working dwarfs in the back, this is the article for you. On the other hand, if you’re the protector of light, builder of tunnels spreading from here to Tokyo underground and gold nugget connoisseur, you’re just in the right place!
If you have the role of a gold digger, the game will be much simpler to you. It is rather easier to win that way. 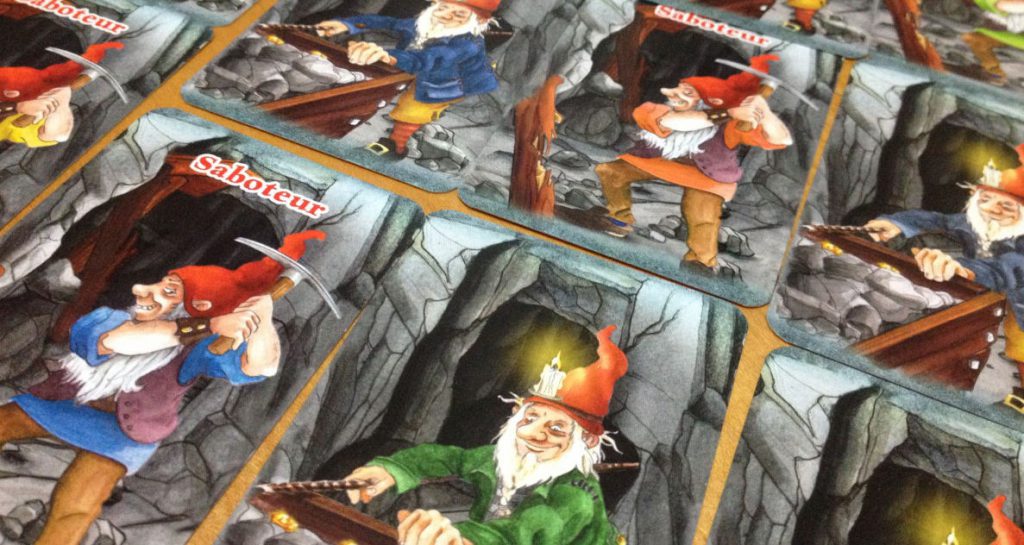 Remember: there is only 1 or 2 saboteurs/your enemies in the game. The most important thing to do is: FIND THEM! Less time you spend to find saboteur(s) and imprison them, more time you’ll have to repair their bad deeds and safely find the gold nugget. Carefully observe players actions and try to deduct who could be saboteur. Set aside the obvious (like building a dead end tunnel), saboteur can be recognized by:

* he’s building tunnels left and right, but not upward
* he’s not building anything, just discarding and drawing new cards
* he’s breaking player’s mining tools with no apparent reason
* he’s building left, and the gold is right (you’ll sometimes know this by using map card)
* he’s accusing other people of being saboteurs

But also have in mind: this is just hints. Nothing from this list is 100% accurate. Try to use your common sense and your best judgment.
Save your cave-in cards, cos’ when the saboteur strikes with a dead-end path card, you’ll need it.

Save your cave-in cards for situations like this one!
Also, your other best card is the path card leading to all 4 sides. The best way to say: “I’m not a saboteur!” is to place this kind of a path cad right at the beginning of the game. Saboteur will almost never do something like this.

Try to build straight upward as more as possible. Don’t go left or right if you don’t have to. Don’t create the perfect path card for the saboteur to destroy. Avoid path cards surrounded with cards from all four sides.

There’s also one other tricky business when playing the gold digger. When saboteurs win they all get the same amount of gold, but gold diggers does not. Who ever gets to the gold nugget the first, he’ll probably (I say probably because sometimes, very rarely, all get the same amount, when all the drawn cards are of the same value) going to get more gold pieces. So, here, the game is trying to turn gold diggers against each other. If you can get to the gold first – great! but don’t let the saboteur(s) win by saboteuring your fellow players. It’s better to get lesser amount of gold, than let the saboteurs win and get none.

Also, note that the gold cards are being distributed anti clockwise, so if you can’t get to the gold first help the player sitting left from you to reach it. That way, you’ll have second pick which can often be just as good as the first one!
Well, that’s it. Until next time, don’t forget to sabotage the saboteurs!