Role playing games usually have big rulebooks, filled with plenty of rules, mechanics, traits, skills, attributes, gear, magic items and everything else that a player might need in order to have a great experience with the game. Some RPG’s go with the multiple books style (D&D always comes in this form), giving you a player’s book and a game master’s book. Other games are packed in one giant rulebook (sometimes 350+ pages long), which incorporate the player and the game master rules, and even add a bestiary filled with monster to the mix!

So, in these days of giant books and crunchy games, it is very interesting to stumble upon a role playing game that tries to give you everything you need in just 20 pages! You don’t believe me? Well it’s true! It’s Dungeonslayers. Do you want to play a role playing game with simple, yet elegant rules? A game of old fashioned “go down into the dungeon, kill some monsters and take their stuff”? Dungeonslayers is definitely the game for you!

As you can see, Dungeonslayers is a game of heroic, fantasy, dungeon-delving and monster-slaying! It is a game in which you can create a character in about 10 minutes and join the action right away. The characters are not as complex and deep as in other games, but this doesn’t mean that they are any less fun.

Character creation includes a couple of simple steps. The first thing that you do is distribute points in your character’s main attributes and abilities. Each character in Dungeonslayers has three attributes: Body, Agility and Mind. Each of these attributes has 2 abilities associated with them that further define your character and his capabilities: Strength and Toughness for Body, Reflexes and Dexterity for Agility, Reason and Aura for Mind.

The next step is calculating your Combat Values. These are the values that you will use very frequently in the dark dungeons filled with scary and terrible monsters. They are all calculated by adding together some of your attributes and abilities. So, what combat values will you be using in the dungeon?
Hitpoints – this is a measure of how much damage you can take before your character is in trouble and falls unconscious. As long as you have at least one hitpoint remaining, you can function normally.

Defense – A value that lets you resist some of the damage that those pesky monsters and traps deal to you. Better armor gives you better defense.
Melee Attack – Your ability to swing stuff at your enemies and hit them. Swords, maces, spears and even fists all fall into this combat value.
Ranged Attacks – Striking and throwing things at your enemies from a safe distance. Bows, crossbows, slings, throwing axes and knives and everything else that you can throw falls into this combat value.

Dodge – This one is real simple, avoid getting hit! No matter the protection that you have, it’s always easier to stay alive if you don’t get hit by a giant axe! Heavy armor actually reduce this value, as they hinder your mobility.

Spellcasting – The combat value that mages prefer. The ability to cast normal (non targeted) spells that do not require a specific target.
Targeted Spells – The second mage combat value, this one is for casting targeted spells. Your ability to unleash fiery (or watery, or airy, or whatever you like) hell on your enemies!

After the combat values, you get to pick a race and class for your character. There are three races and three classes to choose from. The races are Human, Dwarf and Elf. Each race gives you a small benefit or two, and if you need more races, it’s very easy to come up with new ones. The classes that you can choose from are Fighter, Scout and Spellcaster. The perfect trio for a simple game of killing things in a dungeon! If you create a spellcaster, you have to select if you want to be a Healer, Wizard or Black Mage. Your race and class will give you additional bonuses to your attributes and abilities. 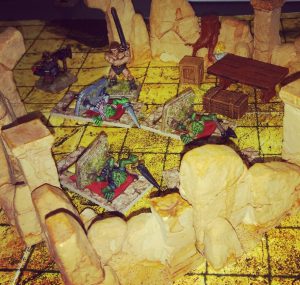 After this you get some starting money in order to equip your character (you wouldn’t go into a dungeon without some rope, would you?), and if you are playing a spellcaster you get to select one spell that you know from the beginning. Your character is ready! It’s that simple! And if your character manages to survive a couple of dungeons, he will start to grow in experience, allowing you to grab some new spells and talents for him. Talents are cool advantages that will make your characters learn new tricks and combat moves. Simple characters, many options!

The system that Dungeonslayers use is based solely on the twenty sided die (the d20!). Your party will usually move through a dungeon, and when they enter a room with some monsters, it’s time to bash some skulls! When you want to attack an enemy you roll the d20! depending on your weapon of choice, you will either use the Melee Attack, Ranged Attack or Targeted Spell combat value. All you need to do in order to succeed is to roll under your combat value! Now this is the cool part, if you are successful in your attack, that is the number of damage points that you will inflict upon your enemy! Another simple and elegant mechanic! The enemy then gets to roll against his defense combat value, and if he is successful, the result gets subtracted from the damage inflicted. So wear a lot of armor if you plan to survive the hordes that await you in the dungeons!

Dungeonslayers… An awesome and fun role playing game! Because it is so easy to learn, anyone can play it and it makes a fantastic entry game into the world of role playing. And the best part, this game is completely free! That’s right, free! If you like what you read here, hop to their site, download it and start playing! www.dungeonslayers.com , trust me, you won’t be disappointed. The current edition of the game is 3.5, but 4th edition is in the making and, I suspect, it will be even better!