I finally had a chance to try to play Dreadfleet and I have to say that this game is quite awesome. For those that are not familiar with this game, Dreadfleet is a naval pirate war game set in the Warhammer World. This game has one of the best looking warship miniatures I have seen in a long time. Ships are very good, although I heard people complaining about assembling them. In Dreadfleet players take control of one or more warships and are trying to accomplish their mission depending on the mission. This game is played on a gaming at that represents a sea your ships are fighting on.

In Dreadfleet there are ten different warships and each of them has unique card. This card represents the warships characteristics and keeps track of how damaged your ship is and other stuff. In general each warship card has stats, places for putting different damage cards, status cards and your captain’s special ability. So now we will look at each of these separately. 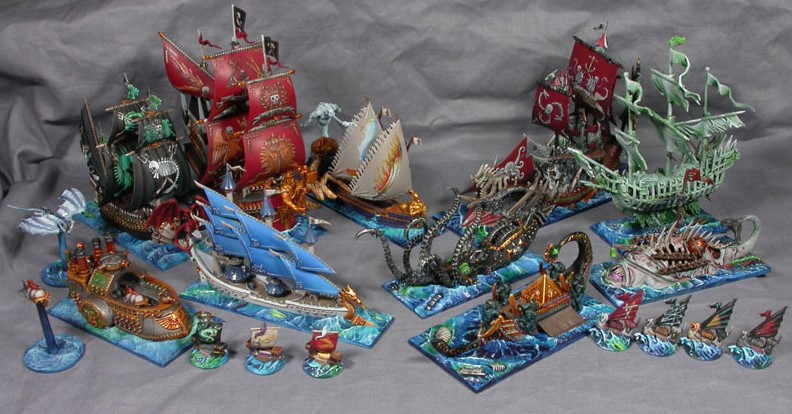 Each warship has its own speed characteristic that represents the number of inches your ship can move. Smaller ships are faster and can move further. Speed is also affected by the wind, so you have to be careful how the wind blows in order to use it to gain speed.

In Dreadfleet every warship also has a hull characteristic and this is to show how endurable and strong your ship is. This is actually a number of wounds it can sustain before it is sunk. In order to sunk the enemy ship it has to get enough hull damage cards equal to its hull characteristic.

Now we move on to the most important characteristic of all. Warships firepower is one of the most important things. In Dreadfleet this is represented with broadside characteristic. This number actually means how many dice you roll when shooting at the enemy ship. There are different penalties and bonuses that are added to this number, but I will talk about them later.

And finally we have handling. This represents how agile and quick your ship is. Handlings value represents a number of inches your warship has to move before it can make a turn of 45 degrees. Smaller ships are easier to wheel while huge warships require more space in order to turn.

Each ship has a different captain and they are all different in experience. Captain’s most important characteristic is his command. This represents how good your captain is and how obedient your crew is. When trying to issue an order, captain must first pass a command check. These orders are very important and I will explain each of them in later articles.

Each captain also has a swashbuckling characteristic that represents the number of dice player rolls while in two captains are dueling. You can lose your captain and still be able to have a full control of your ship, although then you may not issue orders that easy.

Besides this basic information, each warship has its own special ability as well as captain’s special ability. These abilities differ from ship to ship and that is what makes this game interesting, as there are no two same ships in the game.

In the future I will explain basic rules for this game and then each of these warships separately. Until then stay tuned.