My last couple of game reviews were dominated by very fast and intense games. It kind of culminated with the fastest possible game – Frenzy (check out my last article if you already didn’t!), but now I’m going to slow things down a bit. To be honest, I don’t like fast, real-time, intense games so much. Every once in a while I’ll play them, if nothing else then so I can get new writing material for tabletophell.com, but what I really enjoy are more slow, strategy dominated, mind fighting games. After just a couple of games of Frenzy I was so stressed like someone put me in a cage with lions 🙂 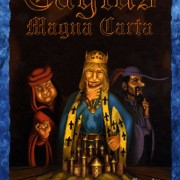 So…. here we are back on my territory, my natural habitat with Caylus Magna Carta. Name of the game may sound familiar to you because there is a game named simply Caylus. It is the board game version of this game, which actually came out first. After they made quite a success with Caylus, Ystari Games and its creator William Attia simplified it a bit and made card game out of it. Final product was a complete success, just like its predecessor.
I said “card game”, which it certainly is, but it is actually somewhat more than that. When I explained what types of card games exist and what criteria a game must meet to be considered a “card game”, I said that you’ll often find additional elements of the game, besides cards. That is the case with Caylus. When you open a game box you’ll find not only cards but several types of tokens and wooden cubes as well. Despite this, this is still considered a card game.

In this game players take the role of a master builder building the Castle by supplying batches of resources to obtain Privilege Points. Throughout the game, players use resources to make buildings along the road to the castle. Players place their workers in these buildings to obtain resources. These resources are used to build further buildings. The game ends once all of the Privilege Point tokens have been given out. The player with the most Privilege Points wins.
Now, let’s see the basic rules!
Each player starts with 2 food cubes (pink), 2 wood cubes (brown), 4 denier (coins) and their 4 worker tokens. Each player’s deck is identical and it consists of 12 building cards. It is shuffled and the top three cards are drawn to make each player’s starting hand. A number of pink cards (which depends on the number of players), the castle card and the bridge card are laid out on the table so that the pink cards form a road leading from the castle and the bridge.

At the start of each turn, each player collects two coins as income and then players take turns executing actions until all players pass. An action consists of either:

* Paying a coin to draw a card
* Paying a coin to refresh your hand (discard all your cards and draw the same number from your deck)
* Paying a coin to put a worker token somewhere on the road
* Construct a building by paying its construction cost and placing it at the end of the road, extending the length of the road by one card.
* Pass. The player places their Passing Marker on the lowest numbered space on the Bridge card. The 1st player to pass earns 1 coin.

Once all players have passed, each building in the road that has a worker token on it is executed in turn left to right. Most buildings produce resource cubes. Some buildings produce coins. Some let you exchange cubes or coins for different cubes or coins. Many buildings offer a primary effect for the person who put their token on the building and a secondary effect for the player who built the building. All buildings are worth a certain amount of victory points at the end of the game for a player that built the building.
After all of the building effects are executed players may choose to contribute batches of cubes toward the construction of the castle. Each batch of three different cubes (1 food, 1 wood, 1 stone; gold cube can replace any other cube!) contributed to the castle earns a castle token. Castle tokens are divided into Dungeon tokens (worth 4 prestige points), Wall tokens (worth 3), and Tower tokens (worth 2). Since the Dungeon tokens are taken first, contributing to the castle early is more valuable than contributing late. In each round, whoever offers the most batches to the castle (in case of a tie, winner is a player who passed first) earns a bonus of one gold cube.

That is the end of that turn, and the next turn begins.

The game ends when all of the castle tokens have been claimed. At that point, player with the most prestige points wins!
These are the basic rules. There are also an advanced rules that include a special token called – Provost. He starts from the utmost left building, but after all players passed each player(in pass order) can pay up to 3 coins to move Provost up to 3 spaces in any direction. After all players passed here as well, activate workers but only the ones LEFT from the Provost token! This adds an additional aspect to the game which can be very, very swingy.

So, there it is, fantastic game of Caylus Magna Carta. Artwork is beautiful, very colorful and vivid. Wood pieces are quality made and long-lasting. Of course, that is not all. Game itself is very fun to play, very competitive and mind-provoking on a couple of different levels. If you ask me, overall a superb product!